Malappuram represents an interesting blend of natural and man-made geographical features. The terraced hill top has a tremendous potential for agriculture which is all the more enhanced by the presence of a fine network of streams that intersperse all across the city. 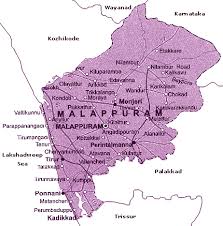 The important hills of Malappuram foothills are Vayutmala which is above two thousand meters as is also Vallarimala. Then there are the lower foothills which are about six meters high each and are called Chakkumala followed by the Pundalur hills and then come those which are just about five hundred meters and are called the Urothmala.

Just like with the wide network and variety of hills there is the network of important rivers of the prominent ones which are the Beypore and the Chaliyar River. Other rivers in this river system are the Kadalundi, Purapparamba, Tirur and Bharathapuzha.

Each river or tributary has a strategic position and is valuable for its vital contribution to the region. Taking them one by one the special attributes of each river are: -

There are a number of backwaters and lakes also in the area. One of the famous lakes of the region is the Veliyancode Lake and is placed five kilometers on the south eastern coast of Ponnani. The other backwaters with the Marancherry Koyal, the marijar Koyal and the Valacherry Koyal. A regular or was installed here to cleanse the salt from the sea water and making it fit for drinking water.

The climate in Malappuram is mildly hot and quite humid with a very heavy raining season during the monsoon. Thus, the best time to visit this region is during the months from September to March.

The green hilly terrain provides the city with its lungs. It provides for a highly-rich environment that is health promotive and very enriching. Due to its environmentally healthy and rich climate the region has been declared as the epitome of cleanliness and health. Its health giving potential has been recognized widely and as yet has not been exploited to the maximum. There is no dearth of natural flora that is health promotive. There is great potential for the region to be developed for health tourism. While the mainland is rich with coconut palm trees which are considered the wealth of the area but the real treasures are the rich forests filled with the Malabar teak which is world famous and an excellent construction material much sought after by a large number of builders, developer and infrastructure creating professional.