Home city guide malappuram to manjeri in one day

Malappuram to Manjeri in One Day

Malappuram has been the centre of commercial and economic activity in South India. Historically, certain places near Malappuram had strategic significance. One such location is Manjeri. 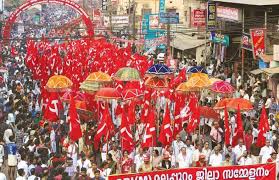 A one-time centre of rebellion and revolt, Manjeri is the birth place of Ali Musliyar a brave and witty rebel leader. The Malabar rebellion of 1921 and the anti-British revolts of 1790 were sparked off in and around Manjeri town. Located at the foothills of the Western Ghats and stretching to the Arabian Sea is this beautiful little town that has an even climate all the year round and is ideal to visit at any time in the year barring the monsoons months from June to August. The humidity is quite high during these months but becomes bearable after the monsoons. The quaint little township has many a place of interest for the tourists to explore. The places for sightseeing that can be visited in a day at Manjeri have been planned in the following itinerary.

9:30 am: After a healthy breakfast one can set off by road to visit site of the 1921 Mooplah riots or the Malabar rebellion at Nellikkuth. It is also the birth place of the great freedom fighter, Ali Musliyar. It’s a scenic drive to the place leading up to an equal alluring beautiful scenery enriched location just six kilometers from Manjeri.

10:30 am: One continues drinking in the natural beauty of the environment by travelling to the Pandallur hills where one can enjoy the panoramic view from the hilltop. One is literally spellbound by the beautiful view of the dam. The rocky environment around the region is inviting. There is also the site of the Manjeri Medical hospital which is soon to come up in this invigorating health promoting environment at twelve kilometers from Manjeri town.

11:30 am: Another beautiful site is located at Pullancheri. Nestled in the beautiful greenery of the hills, its beauty is heightened by the presence of a dam, situated on the Kadalundy River.

1:00 pm: Lunch can be planned on a healthy ayurvedic lines at this destination. Travelling towards Printhalmalla just six kilometers out of Manjeri is Poonkudi Manea. It is the site for holding the renowned Poonkudi Thalapodi festival which draws a number of Hindus devotees. This place is also renowned for the Ayurvedic treatment of all sorts and especially for mental ailments.

3:30 pm to 4:30 pm- A visit to some of the heritage temples is essential. One of the ancient temples is the Thurakkal Oranodath Temple as is also the Melakkam Kalikavu Temple. The oldest temple, the Narukara Narumadhura Meenakshi temple is also situated there. The place Narukara gets its name from the same temple.

6:00 to 7:00 pm: There are a few landmarks within Manjeri town that need to be seen for getting a true feel of the township. One can end the day with these before dinning and calling it a day. Among the must-see sights are the Doordarshan Relay station on the eastern, hilly part of Manjeri. Another spot for the sight seeing is the Pattarkulam or the ‘umbrella stone’ also called ‘Kadukullu’. It is a peculiar umbrella-shaped stone, as the name denotes, which is more than two thousand years old.

Thus, Manjeri has a lot to offer in the form of environmental, religious and eco-tourism.

How to Reach from Malappuram to Manjeri

Travelling the distance of about ten kilometers from Malappuram to Manjeri takes just about twenty minutes because one loves to go at a leisurely pace savouring the beautiful scenery.

The journey may be taken up by bus or in one's own car. The bus journey would cost around ten rupees. If driving on your own then here is the road route: Turn right onto the Malappuram- Parappanangadi road for about one kilometer. Take a left and go for about two kilometers passing by the Orchid hospital and Apollo Gold going for about one and a half hours on the Kozhikode-Ferokh-Palakkad highway. Passing the Bank of India on the left turn right towards Tirur-Malappuram-Manjeri Road or the State Highway number seventeen for about five kilometers. Passing the Darussalam Madrasa and the Hindustan Petroleum on the left travel on for about three kilometers to reach Manjeri situated on the left side of the road.