The Kondotty mosque as it is popularly known is formally the Pazhayangadi Mosque is situated in Malappuram in Kerala. It is a spectacular mosque and is one of the most ancient and most revered of old mosques in Kerala. It usually has a large number of pilgrims visiting every year. The mosque was built in the memory of Mohammad Shah who was a very devout old ‘Musalman’ or a true follower of Islam. He was popularly titled as Kondotty Thangal and was much respected in the entire region. It is in his honor that this marvel, in white marble, has been dedicated to Kondotty Thangal and is also called the Kondotty Mosque. 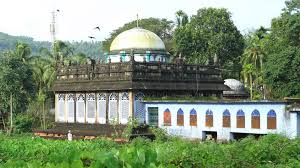 History of Pazhayangadi Mosque in Malappuram

Constructed in the true Mughal traditional sculpture and architecture. It is the pristine white dome of the mosque that rises like a beacon out of the verdant green, hilly environment and inspires its visitors with ave. Built about five hundred years ago the Pazhayangadi Mosque continues to stunningly impact upon the several pilgrims visiting it annually. The name Kondotty emanated from the name of Kondotty Thangal, the pious and eminently respected Muslim saint. In fact, even the place is named after the saint.

The masjid situated in Kodungullur, in fact, was the first mosque built in the country.

The most significant festival of the Kondotty mosque is called the Valiya Nercha or the Kondotty Nercha. ‘Nercha’ stands for celebration or festival. Although elaborate displays of cultural exposition are not in accordance with the austere form of worship followed by austere Muslim who forbid the holding of such festivals on the tombs of dead persons.

The Kondotty Nercha lasts for a week in the month of February and March. The weather is pleasant during the season and pilgrims in their thousands flock to the mosque. The festival at the Kondotty mosque is held for a week. There are several elaborate preparations made for the festival beforehand. There is a cultural extravaganza that extends over three days intensively but is celebrated over two extra days to begin and wind up the festivities.

While several expert gives musical renditions the pilgrims pay their obeisance at the mosque and sit a while to enjoy the divine music. A large number of stalls selling all kinds of wares ranging from mouth-watering dishes to exotic clothing, jewelry, toys, decorative and utility items besides any number of household utensils.

How to Reach Pazhayangadi Mosque in Malappuram

By road - Kondotty is situated at a distance of about eighteen kilometers on the eastern horizon of Manjeri that lies proximal to Malappuram which is located on the National Highway number seventeen.

By rail - The nearest railway station for reaching the Kondotty mosque is the one at Manjeri which lies at a distance of thirty odd kilometers from Kondotty by road.

By air- The nearest airport is at Kozhikode lying about thirty kilometers on the road to Kondotty on the National Highway number seventeen.