Malappuram is a prominent district of Kerala when it comes to sports. It has ample infrastructure for several types of indoor and outdoor sports. The people of Malappuram promote its sportsmen and women by way of regular sports festivals, competitions and games. Football is the most rigorously supported game of Malappuram. Its popularity is apparent in the epithet given to the place. The district is also known as the ‘soccer capital’ of Kerala. The HSS Malabar Special Police team had been the runner up in the international Subrato Cup Tournament held at Delhi. There are regular inter-school sports tournament in which the participation of football teams takes the pride of place. The district is famous for one other extraordinary sport activity. 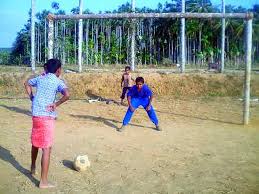 The main sports activities of Malappuram are listed below.

Malappuram thrives on football. The municipal stadium of today had once been the centre of the Britishers and local football battles. The place was then known as Kottapadi Maidan. Some of the famous players of national fame belonged to Malappuram. Irumban Moiudeen and Moiudeen Kutty are some prominent names in football that hail from this place.

The most popular venues where the locals hold their state and national games and sports are as follows.

Some other stadiums famous for football activities are Malappuram Municipal Stadium, MSP Police ground and Kottapadi Football Stadium. Other than these major venues there are some popular facilities for football available at the following stadiums also.

Hockey is another important game played by the people of Malappuram. GBHSS Hockey team is a well known fixture for hockey in various tournaments

Malappuram has also not remained untouched by the huge popularity of cricket. The Kerala Cricket Association, formed in 1951, has started running fixtures for the game. The major problem facing cricket is the longish season of rains in the area. The uncertainty of rains has never allowed serious efforts to promote the game of cricket in Malappuram as in Kerala.

The practice of athletics holds the pride of place in sports. It is a big activity in Malappuram also. It is true that for the most part the athletics are pursued on individual basis. The major activities are supported and held under the aegis of The Kerala State Amateur Athletic Association. This state body looks after the improvement of the activities in Malappuram also. Irfan Kolothum Thodi-sometimes known as ‘Malappuram Express’- is one great name from Malappuram. He brought honour to the country in race walking event in London Olympics.

Here is the list of some of the sports stores in Malappuram.