Situated just about eight kilometers from the ancient pilgrimage centre at village Thirunavaya located in southern parts of Tirur. This temple is the traditional seat for holding the Mamankam festival, which is held to commemorate the ancient ‘Suicide squads’ of the traditional martial arts. The first attack on the temple had taken place during the 18th century during the reign of Tipu Sultan. 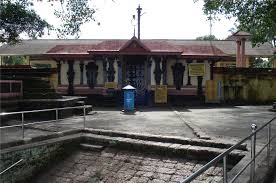 Legend has it those nine ascetics or the ‘navayogis’ who were the sons of the king of Ayodhya called Hrishabha loved to roam on the Earth. They were travelling constantly. One day at the confluence of the ‘Bhagmati’ and ‘Gantaki’ rivers in the Nepal region, the oldest son called Kavi obtained the ‘salagram’ or stone icon of Lord Vishnu. These are often found in the Gantaki river bed and rivered by the people while in a trance. Kavi heard Divine instructions telling him to install the ‘salagram’ at a suitable place where it could be worshipped. He traveled far and wide and finally came to Thirunavaya on the banks of the Bharatapuzha River where Lord Vishnu himself had conducted a Yagna with Lord Brahma.

However, when he planted the ‘salagram’ on the ground it sank into the earth. Kavi's other brothers, seven younger to him, were also carrying ‘salagrams’ followed his example and placed two ‘salagrams’ on the same ground. These also sank into the Earth. However, the youngest brother whose name was Karabhojanam learnt of the earlier attempts and realized that the proper rituals which were mandatory for the installation process to be acceptable and complete had not been performed. He performed these necessary rituals and installed the salagram in his elder brother’s name and honor. Later his brothers returned and performed a ‘Yagna’ at the same place which is why the place earned the name of ‘Thirunavayogi’ or the place where nine yogis had performed holy rituals. Over the years the name went through several changers and the place came to be called ‘Thiruvanaya’.

The highly regarded ritual ‘Pithru Tharpanam’ or appeasement of the souls of the elders or those who have gone from the Earth is most significant. This specialized ritual takes place on the New Moon Night or Amavasi during the month of ‘Karkitaka’ or July. During this ritual the devotees offer ‘Bali Karma’. It entails people bathing in the early morning and offering prayers in wet clothes after they have dipped themselves three times in the river. It is believed that once the ‘Bali Karma’ is done the sins of the devotees are washed away and forgiven and the souls of bygone ancestors are appeared and put at rest and peace.

Certain offerings or ’Vazhipadus’ have to be prepared in advance for which several activities have to be undertaken beforehand. The temple administration takes up booking for the offerings, two days in advance.

The annual festival of the temple takes places during March-April or in the month of Meenum. The festival goes on for ten days. The festival is initiated by the ‘Kodiyettam’ ceremony or the flagging off of the ritual celebrations. The festival comes to an end with ‘Arathi’ or bathing of the idol. The temple permits the entry of only Hindus. The worshipping time here is five to eleven in the morning and from five to seven in the evening.

How to Reach Thirunavaya Temple

The nearest airport is at Kozhikode at about thirty Kilometers from the Thirunavaya Temple.

By rail the Temple can be accessed by traveling to Malappuram through the Mangalore-Madras track or the Shormur-Nilambur track. The railway line is fled by most of the trains reaching Kerala.

By road the Thirunavaya Temple is connected by National Highway seventeen. A number of government and private buses and taxis take the devotees to and from the temple regularly.