Thrikkavu Sri Durga Bhagavathy Temple, an ancient temple, situated in the Malappuram district of Kerala, is an abode of Goddess Durga. Though it is not known when the temple was built, it is believed that it was Lord Parasurama who consecrated it. It was also one among the 108 temples which he consecrated for Goddess Durga. The name Thrikkavu is originated from “Thrikkani Kaadu”. 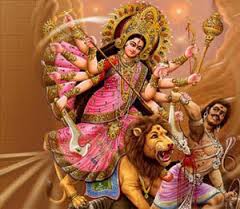 It is said the Lord Parasurama after reclaiming of the Kerala and throwing his “Sruvam” in the ocean, consecrated 108 Durga temples along the cost of Kerala. Similarly, he consecrated the same amount of Siva temples along the high land especially for the security of the people, the flora and fauna of Kerala state. It is believed that Thrikkavu Sri Durga Temple is also one among them.

Here, the Goddess is in the form of ‘Chathurbhaahu” (four arms) form with Sankha (conch), chakra (disc), Katibadha (arm resting in the hip) and Varada (in a boon-conferring pose). The Devi is believed as “Sarvabeeshtapradhayini” – who makes all the wishes of her devotees to come true. There are numerous stories told by the various bhakthas about the benevolence of the Goddess. The Bhagavathy in this temple is revered as Durga as well as Saraswathi. Apart from the Bhagavathy temple, there is also a temple for Lord Krishna and for Upa-devathas like Mahaganapathi, Sidhi Vinayakan, Sasthavu, Brahma Rakshas and Hanuman in the same temple premises. The temple also has got a Kshetrakulam (pond) and you can find Moola Ganapathi, Naga Raja, Naga Yakshi and Naga Pratishtas near the pond. The presence of the temple gave the name of Thrikkavu which means “grove of Sree” which is the short form of Sree Devi – Sree Bhagavathy i.e. Goddess Durga.

Thrikkavu temple is a temple complex and there is another temple in the same compound in the north which is dedicated to Lord Shri Krishna. Sree Durga idol facing the eastward and is adorned with ornaments, garlands and sandal paste. When you see the charming Goddess, calm and serenity descends inside you and you are elevated to ecstasies. The whole sanctum sanctorum reflects in your mind and realise the meaning of the profound statement ‘Aham Brahmasmi’ which means I am Brahma. On the southern side of the Sreekovil in the chuttambalam, Ganapathy shrine is located. On the outside of the chuttambalam in the south-west corner you will find the temple for Lord Ayyapa and in the north-west corner is one for Brahma Rakshas.

The main festival of the temple is “Navarathri” and on the day of Vijayadasami, Vidyarambham is conducted. It is the formal beginning of education to the children and huge number of children attend this. Yet another festival celebrated is Vrishchicka Mandala Mahotsavam which is celebrated during the entire mandalam season.

The temple is governed by Zamurin Raja of Calicut and the Central Devaswom.

How to Reach Thrikkavu Temple in Malappuram