Angadipuram – an important pilgrim centre is a small town in the Malappuram district. The town is located on the Palakkad-Kozhikode NH 213. Once the capital of the almighty kingdom of Valluvanad, during the medieval period, it is well-known for the Thirumanthamkunnu Temple which is dedicated to Goddess Bhagavati and Lord Siva. The temple is situated at Chennai-Calicut road. 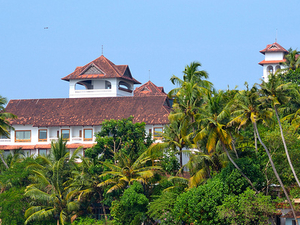 The Tirumanthamkunnu Temple stands atop a hill in Angadipuram, which lies around 2 kilometers towards the west of Perinthalamanna, another town in the Malappuram District.

Sree Thirumandhamkunnu Bhagavathy Devaswam looks after the activities of this Hindu temple.

Story of the split Shivlinga

The legend revolves around a small battle between King Mandhatha and Goddess Parvati.

This region was once ruled by the Surya dynasty; King Mandhatha of the Surya dynasty was an ardent follower of Lord Shiva. The King performed penance to the God on mountain Kailash. Shiva, pleased with the king’s worship, blessed him with the Shivalinga, which was worshipped by Goddess Parvati religiously.

Knowing about the Shivalinga being gifted to the King by Shiva, Goddess Parvati declared a war with the King to get back the Shivalinga. Though unarmed, the King faced the war to protect and retain his divine gift.

During the battle, there was a split in the linga and, hence, the Devi could not beat the King, accepting the God Shiva’s gift to the King.

Hence, Goddess Parvati established herself near the Shivalinga. Thus, the Shivalinga is accompanied by the huge idol of Goddess Parvati, also named as Thirumandhamkunnilamma by the local population; decorated with beautiful ornaments, and having weapon in each of her eight arms. The idol of elephant God Ganesha is also present beside the divine couple.

Along with the idols of the Shiva family, the temple has various painting which depict the whole legend behind the origin of this temple.

The Tirumanthamkunnu Temple is known for its rich rituals and festivals. The rituals performed here are unique to this temple, and cannot be seen at any other Hindu temple.

Mangalya pooja – Ideally done by those bachelors looking for a suitable match for themselves; this offering is made to Lord Ganesha.

The most important part of this pooja is that, it has to be done three times (once every year), even if the devotee gets married during this time period.

Angadippuram pooram – The most important annual festival celebrated here. It is the longest festival carried out in any temple in the world, which is celebrated for 11 days; celebrated during the March-April season.

The Tirumanthamkunnu Temple is unique in the way that everyday, five poojas are performed. You can find below the timings of all the poojas performed here.


Following the Ucha pooja, the temple is closed and again opened for the Thirunju pantheeradi.

The Tirumanthamkunnu Temple has laid some rules and regulations which are to be followed by the devotees.


How to Reach Tirumanthamkunnu Temple

From the Angadipuram Railway Station, move southwest onto the Railway Station Road toward Kozhikode-Ferokh-Palakkad Highway/Valanchery - Nilambur Road. Take a left onto the Kozhikode-Ferokh-Palakkad Highway/Valanchery - Nilambur Road, and make a U turn. When you pass by the Angadippuram Juma Masjid on the left, turn right onto the Poonthanam Temple Road. When you pass by the Anoop Vrinda on the left, you will reach the Tirumanthamkunnu Temple.

The hotels nearest to the Tirumanthamkunnu Temple are listed below.